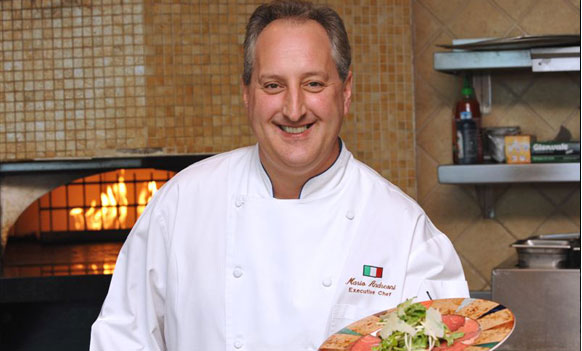 Mario Andreoni
Executive Chef
Mario Andreoni is the Executive Chef at Panevino Ristorante & Gourmet Deli. World-renowned for his culinary experience and knowledge, Mario began his culinary career in Italy. Born in Venice, Mario always had a natural love for food and its preparation. Beginning with his first restaurant job at the age of 15, Mario understood he wanted to devote his life to becoming a great chef. Observing the first chef he worked with, Mario began to develop his signature sense of flavor combination, food quality and presentation, which he masters today.

Attending the Hotel & Restaurant School in Venice, Mario’s aptitude for learning traditional styles and the techniques of food preparation paved the way for development of his own style and flair for preparing incredible cuisine. After graduation, he became part of the culinary staff at Hotel Cipriani’s five-star restaurant in Venice.

After learning and working with the top chefs in both Italy and France, Mario was offered the opportunity to be Executive Chef at Casa de Campo, one of the world’s top 10 resorts, located in the Dominican Republic. Overseeing the resort’s five European-style restaurants, Mario brought to Casa de Campo his appreciation of the importance of delivering the fresh flavors of the products he worked with to the plate and discovering new ways of heightening and enhancing his cuisine.

After three years at Hotel Casa de Campo, the proprietors opened the Biltmore Hotel in Miami and made Mario Executive Chef of its gourmet Italian Pavilion. Under Mario’s direction, the Italian Pavilion won numerous awards including three Golden Spoons from the Miracle Mile Feast. Revered for his incredible Italian cuisine, Mario’s skills and reputation brought an invitation from Caesars Palace to become Executive Chef of its Primavera Restaurant. Mario gladly accepted, remembering Caesars legendary status from his boyhood days in Italy.

Winning kudos for his outstanding Italian cuisine from the guests of Caesars Palace, Mario brought his talents to independent restaurants in Las Vegas including Café Michelle West and Ferraro’s Fine Italian Dining Restaurant. In 2000, he became the Executive Chef at the Stratosphere Hotel overseeing a staff of more than 280 and the entire culinary operations for the property. Today, Mario displays his unmistakable talent by offering authentic, traditional Italian cuisine and international favorites at one of the city’s most revered Italian restaurants, Panevino Ristorante. Some of Mario’s accomplishment include: the prestigious Coral Gable Miami Gold Spoon Award, Top 100 Chef Award – International Restaurant Rating Bureau and Award of Excellence – International Hospitality.