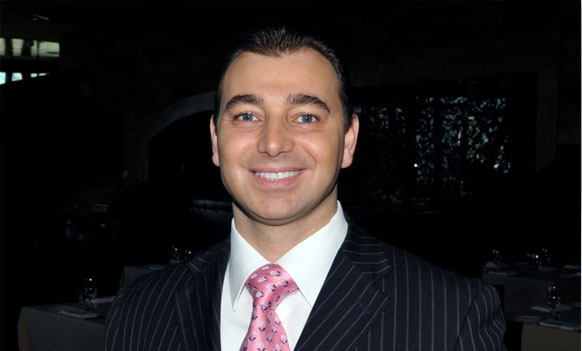 Vincenzo Granata
General Manager
If you ask frequent guests of Panevino, Vincenzo is much more than the General Manager; he is a rare find, a dynamic businessman and the heart and soul of Panevino.

Born in the city of Andria, in the heart of the Puglia region of Italy, Vincenzo grew up watching American television programming, fascinated with the United States. After obtaining his degree in Hospitality Management at the Hotel and Hospitality Management Institute in Bari, Italy, and refining his skills at numerous renowned restaurants and five–star hotels throughout Italy and Europe, Vincenzo came to the United States on vacation and fell in love with the American culture.

At the age of 24, Vincenzo joined the world-famous Le Cirque and Osteria del Circo restaurants at the five-star Bellagio Hotel & Resort in Las Vegas where he was responsible for the daily operations of two of the world’s most renowned French and Italian gourmet restaurants. Instilling the culture of service excellence, Vincenzo successfully operated the two restaurants paying scrupulous attention to details and guests’ needs. His refreshing approach to enhancing the guests’ dining experience did not go unnoticed.

Five years later, Tony Marnell, a renowned architect in Las Vegas, and one of Vincenzo’s favorite customers, asked him to join his Italian restaurant, Panevino. In 2003, Vincenzo accepted the position of General Manager of Panevino Ristorante. Today, Vincenzo brings world-class hospitality, character and impeccable attention to details to the Italian restaurant.

In 2010, he was instrumental in the restaurant’s adoption of vegan and plant-based menu options. No stranger to plant-based cuisine, Vincenzo himself fully adopted the dietary lifestyle and he also proudly attained his plant-based nutrition certification from the prestigious Cornell University. He is currently on his way to completing a second certification in the field – The Starch Solution – developed by renowned Dr. John McDougall. Working with Panevino’s Executive Chef Mario Andreoni, Granata has brought his expertise in plant-based cuisine and practices to the restaurant with the objective of making healthier eating more widely available and embraced by mainstream

.In his spare time Vincenzo also gives back to the community by personally teaching and mentoring children and adults about healthy eating and lifestyle, empowering them with nutritional knowledge and recommendations. He also contributes to other charitable organizations including Create a Change Now, and the Nevada Arthritis Foundation.

Some of Vincenzo’s accomplishments include: the prestigious 2008 In Business Las Vegas 40 under 40 Award and the 2009 Las Vegas Rising Stars Award.